As you’re no doubt aware, Melania Trump will shortly become the next First Lady of these United States. So we thought it’d be fun to glance back at previous First Lady Inaugural Ball gowns, before seeing what Mrs. Trump ‘dons’ for her dance. Not all the way back to Martha Washington, of course; else this would become more of a novella than a blog post. So we’ll concentrate on the eleven First Ladies between (and including) Jacqueline Kennedy and Melania. 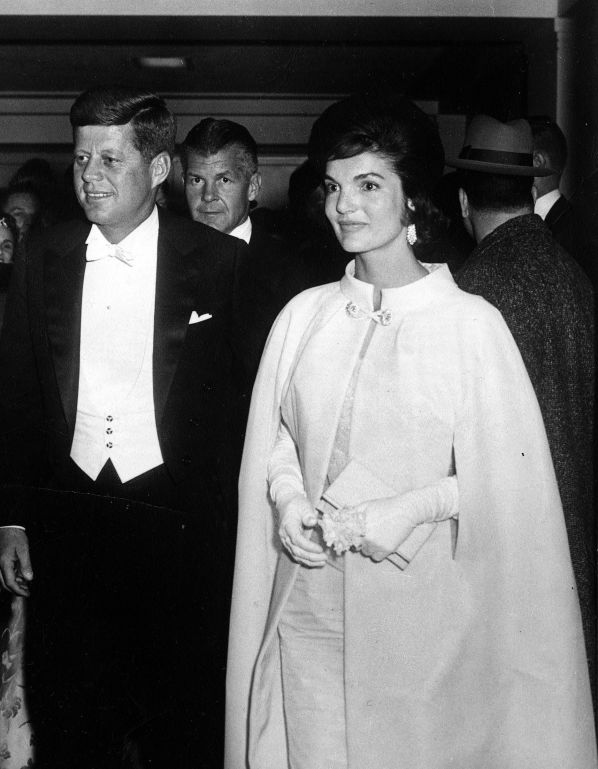 Jackie teamed up with designer Ethan Frankau to create a white gown and cape. The cape was fitting, too; as at the time millions of Americans thought of her as a super woman. Jackie was a very self-aware fashionista. She also certainly took into consideration that a much larger group of people would see her than most of her predecessors, due to the relatively new medium of television.

Mrs. Johnson chose subdued attire for her husband’s ball, owing to the highly unfortunate manner in which she had ascended to the position of First Lady. She wore a yellow gown, accompanied by white gloves and a string of pearls. Lady Bird’s dress was comparatively modest in deference to Jackie’s; in part, understandably, to show respect for the late John F. Kennedy. Though, her sunny appearance was meant to portray that the clouds of mourning would dissipate; that America would recover. A native Texan, Lady Bird was formally introduced to the world looking like -very fittingly- the famed Yellow Rose of Texas. 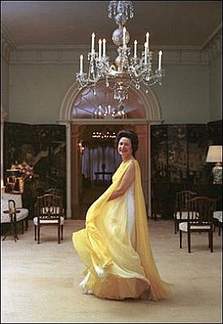 Although they were at opposite ends of the political spectrum, Republican Pat Nixon also opted to wear a yellow gown; just as her predecessor, Democrat Lady Bird Johnson, did. Perhaps Congress should designate yellow as the official color of Fashion Bipartisanship.

Historical note: Betty Ford’s husband Gerald Ford was elevated from the Vice Presidency to the Presidency after Richard Nixon resigned in 1974. When Mr. Ford ran in his own right three years later, he lost the election to Jimmy Carter. As a result, the Ford’s never had an Inaugural Ball. As such, Betty Ford had no inaugural gown. 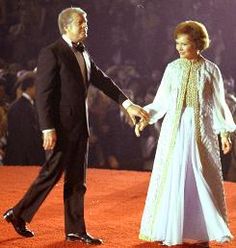 Mrs. Carter wore the same “gold-embroidered sleeveless coat over a gold-trimmed blue chiffon gown”* at Jimmy Carter’s Presidential Inaugural Ball as she did at his Georgia Gubernatorial Inauguration. It was, to say the least, an interesting look. And we’ll just leave it at that.

Please read the second part of this blog post that continues with the six most recent First Ladies. Thank you.