In honor of  our new First Lady Melania Trump, we thought it would be fun to glance back at previous Presidential Inaugural Ball Gowns. This is the second part of a two-part post on the subject, and covers Nancy Reagan to Mrs. Trump. To learn what Jackie Kennedy through Rosalynn Carter wore, please see Part 1. If you’d like to view photos of all of these gowns, please click the link below for the cited complete, spectacular fashionista.com article we’ve summarized over these posts.

Nancy Reagan’s choice of Inaugural Ball attire left little doubt that she and husband Ronald were coming to the White House from the star-studded movie industry. They were a world apart from Jimmy Carter, the Georgia peanut farmer whom Ronald was succeeding; and Nancy knew it. She wore a stunning white, one-shoulder gown crafted “by American designer James Galanos, widely considered to be one of the world’s foremost 20th century couturiers.”* 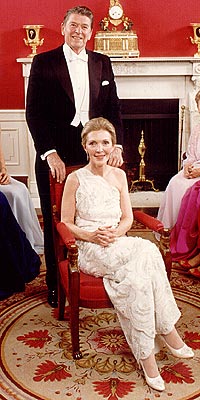 When Reagan’s two terms were up, George H.W. Bush moved into the Oval Office. At his ball, wife Barbara Bush wore a “Royal blue velvet and taffeta Arnold Scaasi gown and pearls”.* The article opines that a Republican wearing the color associated with the Democratic party may have been a signal that they were going to try to work together. That makes sense. Also, that she wanted to make a “regal impression”, tempered a bit with pearls in place of diamonds. It does seem fitting that the country’s new “Queen” would also want to show a connection with the commoners by not going all out on jewelry.

While royal blue hints at royalty, purple leaves no doubt about the link. At her first Inaugural Ball, Hillary donned “a purple, long-sleeved gown by Rock designer Sarah Phillips”,* whose work she first saw in Little Rock when her husband Bill was governor of Arkansas. Mrs. Clinton’s gown really did stand out, and her choice to wear it isn’t all that surprising.

When George W. Bush was elected his wife Laura, aside from her string of pearls, went in the opposite direction her mother-in-law did a dozen years earlier. Laura Bush sported “a bright red gown designed by Michael Faircloth and pearls”.* Solid red is hard to miss, and it was a very classy, elegant look for the new First Lady.

Just as Nancy Reagan did, Michelle Obama went with a one-shoulder white gown; with hers designed by Jason Wu. As Lady Bird Johnson and Pat Nixon also showed earlier regarding Democrats and Republicans, it’s quite apparent that when it comes to colors and styles Inaugural Ball gowns very often transcend politics. 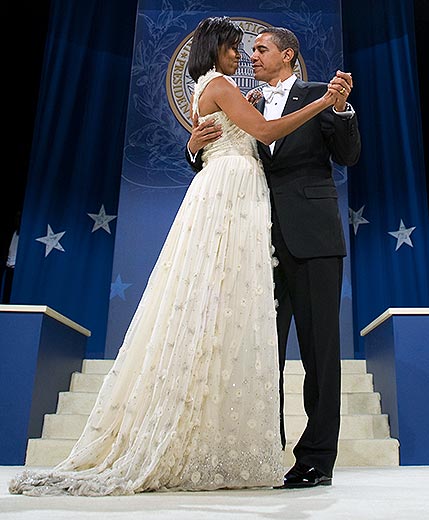 We knew that the former model would be as elegantly portrayed as former First Ladies during the Inaugural festivities. Like many First Ladies before her, Mrs. Trump chose to wear White.  The simple yet elegant gown was exactly what we expected from a well dressed beauty.