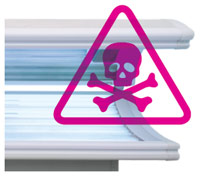 In the world of medicine, good news often comes in small increments. However, some good news is better than any bad news, and we have some we’d like to share. Tanning beds have long been the subject of ridicule by all who are involved in spreading skin cancer awareness. And with good reason. Whether occurring naturally from the sun, or artificially from tanning beds, harmful UV rays are by far the largest cause of skin cancer and its deadliest form, Melanoma. Luckily, Tanning Bed Use is on the decline and we couldn’t be happier!

So, What’s the Good News?

The good news is that, slowly at least, the practice of indoor tanning is declining. As with the U.S. Surgeon General’s first reports that smoking was extremely dangerous in the 1960’s, the information on tanning is taking some time to sink in. And even among those who are aware of the hazards, there are still many who ignore them and continue to risk their lives in exchange for a short-lived darker skin tone. While that is disheartening such thinking is, thankfully, subsiding.

Per the cited usatoday.com article below, over the three year period of 2010-2013, two million fewer people (1.6 million women and 400,000 men) were getting indoor tans. That still leaves nearly ten million who continue to engage in the practice; including a significantly greater amount of young women.

One of the researchers quoted in the USA Today piece stated that more research should be employed to discover why people still opt to use tanning beds. That’s fine, of course. But even without any research at all, it’s likely safe to assume some of the reasons why a hugely disproportionate number of young ladies are unnecessarily rolling the dice. More time, effort and funding should also be directed at explaining why vanity and peer pressure to ‘look better’ is in no way a proper tradeoff for developing Melanoma.

There’s also more to consider. Even if someone using a tanning bed is lucky enough to avoid Melanoma, she (or he) will not be able to escape the lesser forms of sun skin damage. They can look forward to prematurely-aged skin, wrinkles and sunspots; to name a few.

If you’re in a position to spread this information to others, we fully encourage you to do so. The numbers are already dropping, but the quicker we can speed up that trend, the healthier our country will become.