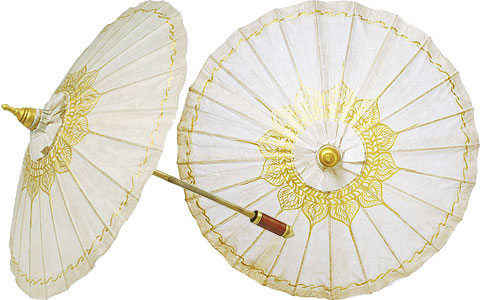 There’s an old saying that goes something like, what once was old is new again. Several millennia ago, long before whomever you believe discovered North America had discovered it, the Egyptians of antiquity were toting around Parasols both for sun-safety and to help preserve their pale skin tones
amidst the blazing desert sun.

They weren’t alone, either. Among others, the Greeks, Romans, Chinese, Indians and, much later on, the French and British to a great extent employed the parasol.

Parasols – Sun Safety Since The Beginning of Time

It’s often difficult for people who’ve grown up knowing only one way to imagine how some things were before they were born. While there are still quite a few left among us who remember a time before television, it’s hard for the contemporary majority to consider that at all. It’s the same with skin-tanning, too.

Tanning has really only been popular since the early 20th century. (Thanks in large part to Coco Chanel.) Prior to her, a premium was placed on maintaining the beauty of porcelain skin. Unfortunately, albeit quite inadvertently, Ms. Chanel didn’t do society any health favors in inspiring a fad that has since never gone away.

Fortunately though, the 20th century also happened to contain more advances in medical science than any other century in human history. Among them was a much greater knowledge of the range and effects of the skin damage the sun and its harmful UV rays have on us.

As with the first serious warnings about the severe consequences of smoking in the early 1960’s, it’s taken awhile for the dangers of tanning and sun exposure to fully sink in with the public. Skin cancer, Melanoma, wrinkles, sun-spots and prematurely-aged skin are all among the risks. Of course, that information has gotten more and more people into the excellent habit of wearing sunscreen. But sadly another simple weapon in the defense of our skin, that ancient parasol, has remained in hibernation for quite some time.

Well, it had, at least. Because the parasol is now on the comeback trail. It’s back on the fashion runways, to be sure. But more importantly it’s back out on the streets, too.

With much greater Melanoma awareness today than there’s ever been, along with the increased knowledge that skin cancer’s the most common cancer in the world, people (mostly women) are revisiting the parasol. It’s been slowly coming back into style, which is great news. Combined with sunscreen, the parasol is an excellent accoutrement in the battle for sun-safety.

Lately, some people are simply using their umbrellas on sunny days; wisely ignoring any sideways glances to put their health first. As it should be.

And while umbrellas are certainly a simple solution, the revival of the parasol means they’re now widely available. Some even for less than $10. Of course, you can always pay more for quality and design. But the best option is to purchase a parasol that’s been specially treated to block UV rays.

No one’s happier than we are to see parasols popping up again, and we say the more the merrier!