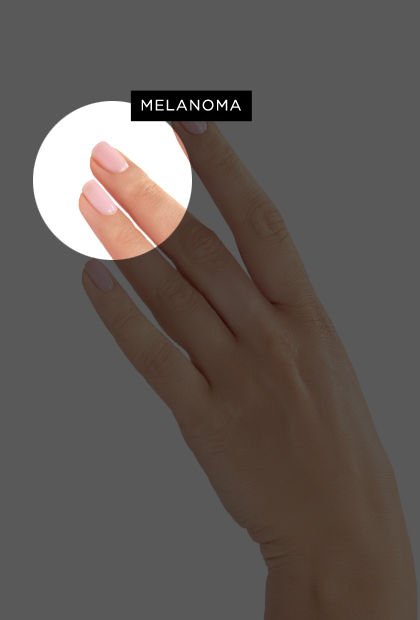 As we’ve often written, Melanoma and skin cancer can occur anywhere on the body. Indeed, this blog just recently covered a rare Melanoma that can begin in your body. Today we’re going to stick with that theme of Melanoma developing where you normally wouldn’t expect it, and focus on Melanoma of the Nails (fingers and toes).

While it’s true that skin cancer is more prevalent in those with fair or light skin, it can impact any race. People with darker skin tones who develop Melanoma are more likely to have it manifest on parts of their bodies that one might not readily think about. One such place is under the aforementioned nails.

While rare, Melanoma that forms under a person’s finger or toenail can also become fatal. In fact, the Melanoma to which popular late Reggae singer Bob Marley ultimately succumbed began under his toenail.  As with some other rare forms of Melanoma, the onset of Melanoma of the nail is (usually) between 40 and 70 years of age. Also, it most often occurs in the thumb or largest toe. Unlike the more familiar form of Melanoma, this type is not necessarily linked to contact with the sun’s harmful UV rays.

What to Look For

Unusual discoloration on or under a nail, unassisted cracking of a nail, or any nail that secretes fluid(s) should be brought to the attention of your doctor as soon as possible.   Regardless of what type of Melanoma has developed; its cause, or its location, one undeniable fact about it remains forever consistent: the speed of its diagnosis can very well mean the difference between life and death. That’s not hyperbole; it’s just the plain truth.

Should you notice the signs listed above, or any other odd changes to a nail, get it checked out. Don’t delay, procrastinate, or put it off for another day.

See your dermatologist nail polish free to have a proper assessment of your nail health.