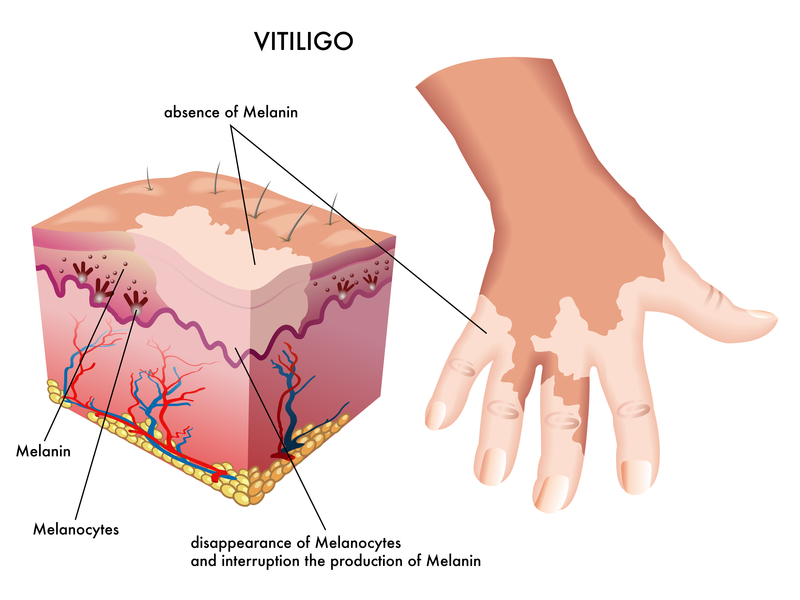 In a recent post we discussed the rare skin condition Albinism. Today we’d like to go over the uncommon, though not-quite-as-rare autoimmune disease, Vitiligo. Like the former, Vitiligo can impact both genders and members of any race. It also can appear at any age.

Medical science cannot state conclusively what causes Vitiligo in those who carry the trait, but significant research has led to a few generally accepted hypothesizes. For example, stress and overcharged immune systems are two examples of potential catalysts. Whatever the triggering event for a given person happens to be though, once Vitiligo manifests, it almost always remains present in some manner for the duration of his or her life.

There are multiple versions of Vitiligo, which presents as visible, misshapen white patches on a person’s skin. In some cases, the spots are somewhat balanced on either side the body. In others, the patches’ patterns are more general and random.

Like the fate of an oar-less rowboat on the open ocean, there’s no way to determine which direction the unpredictable wave of Vitiligo will take, or how aggressive it’ll be. The affliction affects everyone differently, and with time the snow-white patches can continually spread, pause, or stop. In some instances, color can even return to patches on its own.

It’s important to know that Vitiligo is sensitive to the sun’s harmful UV rays. Those with it should take extra care to use sunscreen whenever outside, while paying particular attention to the impacted areas. Additional sun-safe precautions such as those we’ve discussed before on this blog should also be minded. Among them are Sundicators, hats, sunglasses, long-sleeved shirts and long pants.

At present there is no known cure for Vitiligo. Although, recent research indicates the possibility that much more effective treatments than those currently available may be on the horizon. As it always does, time will tell. But there is now more reason for optimism than ever before.

Please note that Vitiligo is not at all contagious, nor is it otherwise physically harmful to those with it. However, as it possesses the ability to drastically alter one’s outward appearance, Vitiligo can be psychologically devastating. So just as with Albinism, understanding, education and compassion regarding it is the order of the day. Thank you.