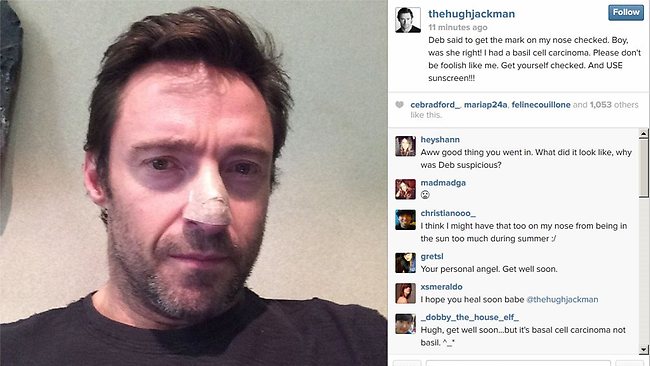 Hugh Jackman, a very popular actor and Academy Award nominee, has recently disclosed his battle with the form of skin cancer known as Basal Cell, which he referred to as, “The mildest form of cancer but serious, nonetheless.” And while that is well put, there is really no such thing as “mild” cancer, to be sure. Jackman also recently posted pictures of his bandaged nose on social media, while pleading with his fans to use sunscreen.

Many times, a disease will languish in relative obscurity until some popular celebrity ends up having to fight it, and then he or she courageously chooses to bring that battle public. Skin cancer and Melanoma have always taken a backseat to more publicized afflictions, so we’re grateful that Mr. Jackman has chosen to come forward and help shed light on this disease.

Skin cancer is no joke. Yes, it’s true that it can be cured relatively easily (most of the time) if caught early. And it’s also very simple to prevent.  But if it’s acquired unnoticed and allowed to move forward, it has the power to painfully destroy a person’s internal organs in a very painful, unstoppable, and fatal progression. This is a disease you just do not want to have, and should take precautions to avoid at every turn. Just as Jackman requests, use sunscreen every time you leave the house. Wear long-sleeved shirts, long pants, and broad-brimmed hats; or at least ball caps, and of course Sundicators UV Wristbands whenever you’re outside.

Any time you’re outdoors, spend as much time as you possibly can in the shade. Also, re-apply your sunscreen constantly, and every two hours regardless at minimum.

Hugh Jackman’s plight, along with celebrities such as the late Bob Marley and former president Jimmy Carter among many, many others, should be enough to illuminate how very important it is to take the steps we’ve been trumpeting on this blog to avoid the road they have to face, and have faced.

Sun skin damage caused by harmful UV rays should be avoided at all costs. And a few simple changes to your daily routine will go a long way in helping you avoid the path that these celebrities now tread.

Thank you so very much, and have a great, sun-safe day!

Syndicators: The Best Skin-surance Under the Sun!