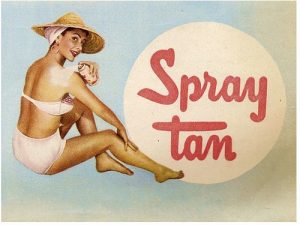 If this blog exists a hundred years from now, you’ll still be reading about how much we believe you’ll always look best in your own skin; regardless of its tone. But we know that there will also always be those who think they look better tanned. If that includes you, then we’d much prefer you to use a spray-tan, and not in any way expose your skin to the damage caused by the sun’s harmful UV rays. That includes the equally dangerous, if not even worse, tanning beds.  Here  is some interesting reading about the history of spray tanning.

We found an interesting article from Huffingtonpost.com (cited and linked below) that gave a brief overview on the history of spray-tanning. The story of spray-tanning begins with an unintentional reminder to us how often perceptions change; sometimes wildly. For instance at one point in time, lobster as a meal was looked down upon. In fact so much so that it was used to feed the destitute and imprisoned. That’s a pretty difficult concept to imagine today, of course. But suntans actually have a similar origin tale.

Like the aforementioned lobster, a tanned-tone was once also looked down upon by higher society, where pale skin was ‘in” for centuries. Indeed, if you’ve seen any in-color movies or reenactment-based documentaries on the Titanic, you’d have to look long and hard to find any first class passenger (either male or female) with a complexion darker than an eggshell. As with many things though, a celebrity can (at times inadvertently) set off a ‘monkey see, monkey do’ fad. In this case, Coco Chanel was the trendsetter. But unlike the hula-hoop or the Pet Rock, tanning was here to stay.r the ensuing decades, as their dangers became better understood, alternative methods of tanning were sought. As is often the case, whenever a demand for something arises, p

Unfortunately, in the early part of the 20th century medical science was mostly unaware of just how bad those UV rays are for us. Overoducts created to satiate that demand are usually not far behind. However as is also often the case, the first versions of anything typically have “bugs” that need to be worked out over time.

With spray-tanning, the inaugural varieties left the consumer with an unappealing choice. The option was to use products that kept them safe from Melanoma, but which also left them looking like a carrot…and with an adhering odor that was less than ideal.

In 2016 though, as you might imagine, the available spray tans are far better developed and more effective than their ancestors. And even just a little research will go a long way in helping you decide which product would work best for you.

But again, while spray tans are without question an infinitely better choice than real or artificial tanning, we ask only that you take another look at your skin beforehand. And realize just how good nature’s own work looks on you.