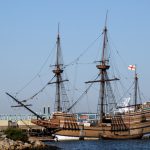 Sunscreen Came Over on the Mayflower?

Do you believe this? When the Pilgrims set sail for the New World in 1620, among the essentials stored in the Mayflower’s cargo hold were several cases of commercial sunscreen? No? Well, it’s because that isn’t true. Sunscreen did not come over on the Mayflower. However with what we now know about the impact of sun skin damage, if their voyage took place today they’d certainly bring some along. But I digress.

In the spirit of the holiday, today we’ll put aside our usual blog post and bring you some more fictitious fun facts about Thanksgiving:

In all seriousness, we here at Pretty Pale, Inc. want to extend to you our sincerest gratitude. For without you, there would be no blog. And without our blog, there’d be one fewer way to further our efforts at maximizing Melanoma and skin cancer awareness.

For your continued readership, we truly give thanks.